Hurricanes and Hot Lava – Biochar in a State of Emergency

This is a true story about biochar on the farm amidst a state of emergency before the lava flow and after the hurricane.

The wind caught us outside before dusk.

It was heavy then, but interesting, so we ventured outside to see what had cracked. Then a gust came through that was more than any before. It froze us where we stoodand sent trees throughout the area snapping to the ground. We ran inside where we hid as it continued through the night. When morning came, we walked around in a daze, absolutely in awe with the mass that had been moved. It took days for the news of what had happened to slowly trickle out. Houses smashed, roads covered, and power lines in tangles.

It was declared a federal disaster area a few weeks later, but I have a suspicion that was also a politically polite way of helping our community simultaneously repair our damages and prepare for the next; a lava flow creeping ever so slowly towards our town center. Then soon after, the only existing roads for the transport of 10,000 residents (including me). 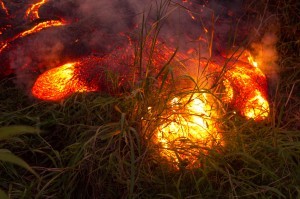 This lava flow is a strange emergency. It is absolutely happening, it is massive, and it is pretty much immovable, yet it’s advancing about as fast as a snail – literally. You can see and smell it just a few miles away and it has been there for weeks now. Constantly on the mind of the those living in the shadow of the smoke released as it consumes the forest in front of it, the lava, which is often referred to here as Madame Pele, is both destroying an old community and creating a new one.

So these days in town, the coffee shop talk is quite interesting.

Q:”How did you fare with [hurricane] Iselle?”

A:”A tree landed…, our neighbors showed up with chainsaws the next day and…”

Q:”Which side of the lava are you on?”

Here is one useful thing I have been doing at the farm; 1.) collect Hurricane Windfall, 2.) transform it into Biochar, which is then 3.)blended with Other Ingredients, and finally 4.) added to Gardens 5.) for Food to eat for when stores aren’t so easy to get to. See the pictures and captions below for more detail. 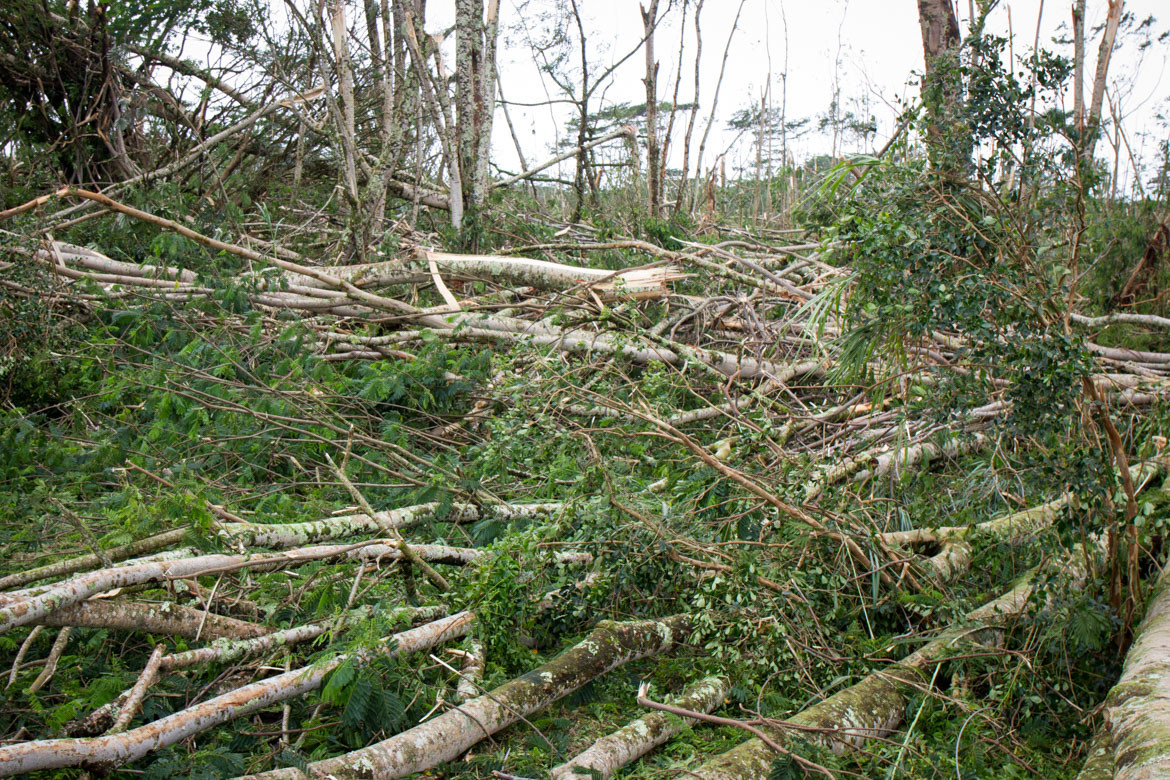 Albizia. The fastest growing tree in the world they say. It is not native here and has an aggressive advantage in the the local forest ecology. In disturbed areas, it can grow a 100′ canopy in about a decade. As we found out recently, when a hurricane comes, it’s advantage turns to a weakness as the flimsy trees come crashing down. The day before this picture was taken, no sky was visible through this albizia forest canopy which now lay on the ground. More houses, cars and property were smashed by this species than any other. 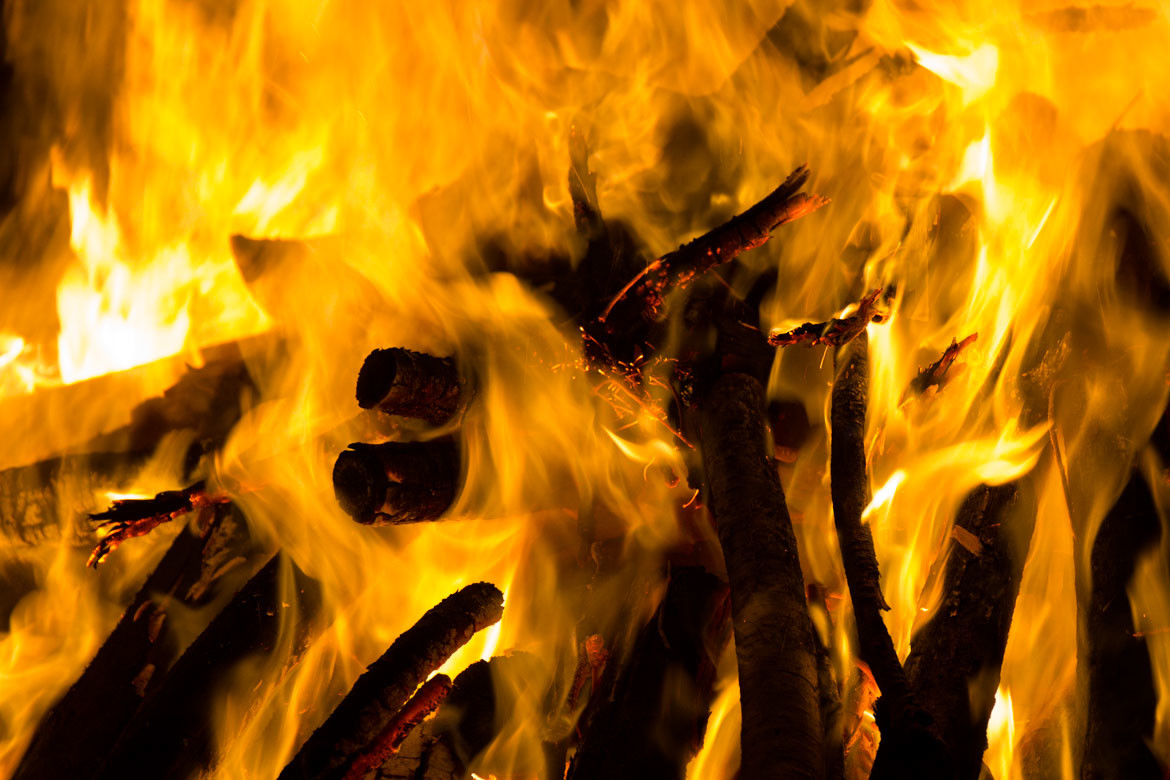 Fire. It has the ability to transform carbon to a different state. It’s beautiful too. The wood featured here is Ironwood, collected from windfall that was cluttering a local fishing spot. It was cut on spot, loaded in the truck, taken home, and transformed into biochar using the large cone shaped pits at my farm. (More on this technique can be seen here – http://pacificbiochar.com/how-to-make-biochar-with-only-a-match/ -) 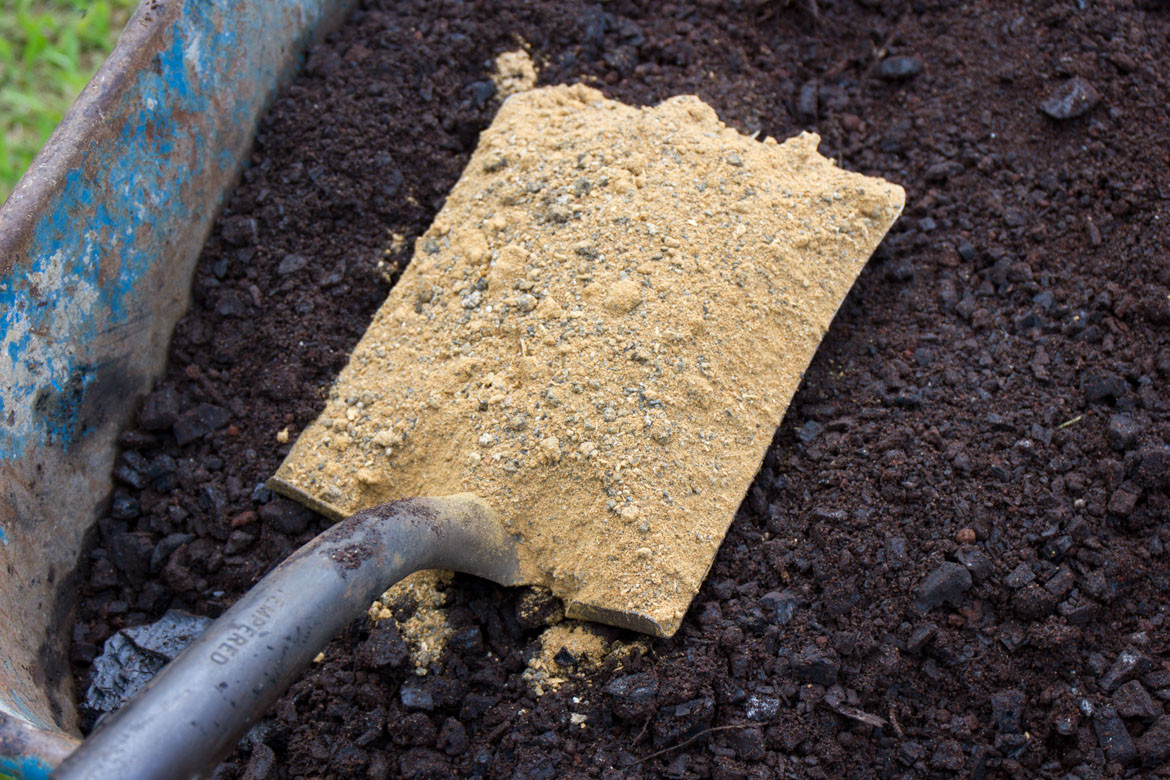 There is more than two pieces to this. In the background is the biochar from pits at home, but it is not just biochar. There is dirt used to smother the biochar coals, that dirt was mixed in with the biochar as it was harvested, maybe about 30% by volume. While transporting from the fire to a storage pile, it was blended with 2% compost and 1% Fish Char (product details here – http://pacificbiochar.com/fish-char-7-5-5/ -). That pile was allowed to mature for a while. In the foreground is FishChar, a blend of organic fertilizer materials. It’s from a personal batch that is a slight bit chunkier than the stuff we sell.

An old garden patch left fallow was mowed short. A volunteer Poha Berry (Peruvian ground cherry) was left standing. The wheelbarrow, about 2/3 full, was spread over the area. The Fish Char that was shown in the shovel above was spread over the biochar. Application rate = 2/3 wheelbarrow and a shovel = about 1/8th of an inch of biochar and about 2 lb. per 100 sq. ft. Fish Char.

Coconut fronds were used as mulch. Layered thick enough, it does a great job of smothering the weeds. I saw this trick in Fiji. The first thing I noticed was an occasional coconut tree stripped nearly naked of fronds. It had me stumped as to why that would be done. Then I saw someones backyard garden just feet away from a stripped coconut, it was mulched with leaves as seen here. Taro was planted. That is what I did as well. Planted in the garden so far is: Tree Spinach – Broadleaf Chaya (Cnidoscolus aconitifolius), Pacific Spinach – Bele, (syn. Abelmoschus manihot), Taro (Colocasia esculenta), Lemongrass (Cymbopogon citratus) and of course the wonderful volunteer Poha Berry (Physalis peruviana). 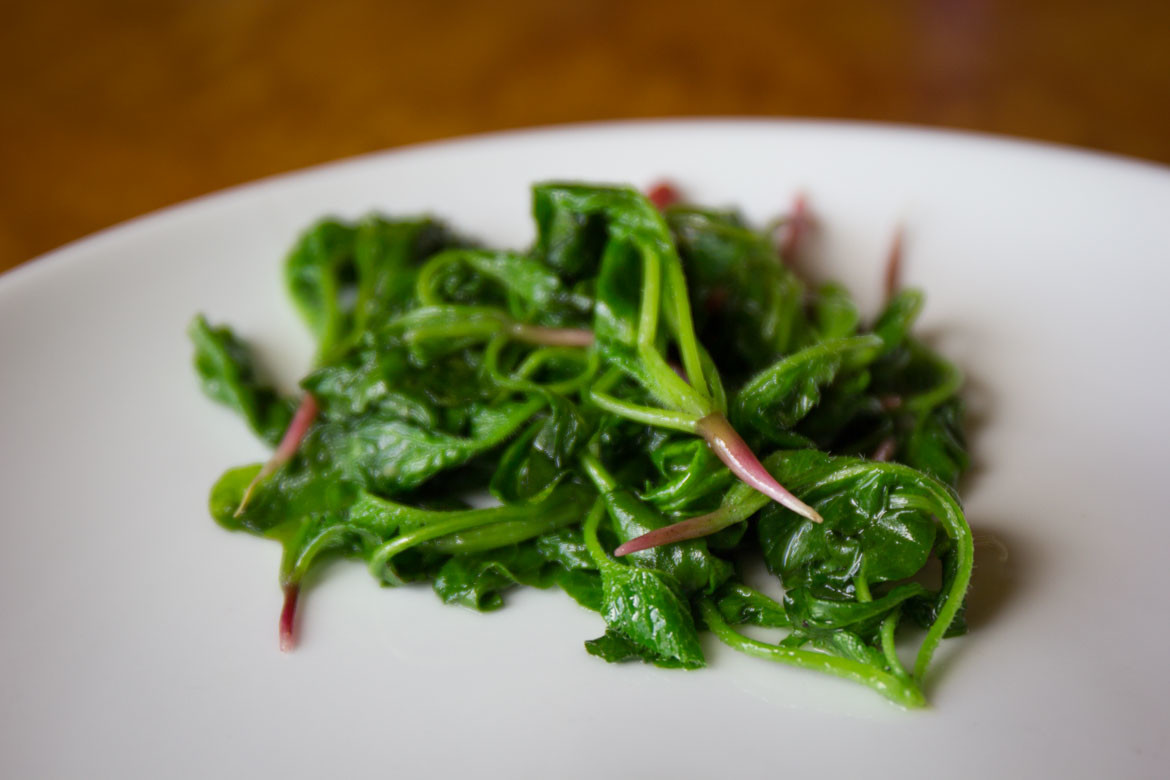 Young radish greens, lightly sauteed in olive oil with a dash of sea salt. The first little snack from one of the post-hurricane, pre-lava garden plantings.

Before the hurricane I had no reference for what 80 mph winds would do. I feel it has been equally difficult for me to imagine what a changing climate will feel like. Not what the air will feel like onmy skin (generally a little warmer right?), but what it will feel like undermy skin. A constant state of emergency;when what the community had historically prepared for is not enough for what it is currently facing. What does that do to a community? How does a community respond? Well that is the great social experiment that I have been thrust into.

Many have already left. Last week there was a long line of slow moving traffic, as we went around a bend, I saw a complete house was loaded on a trailer and slowly making it’s way to a new piece of land.

The moon is full tonight. A lunar eclipse at that. Aloha,

On Thursday, August 7th, Hurricane Iselle hit the Big Island of Hawaii. It was downgraded to a tropical storm a few hours later. The area hardest hit was the district of Puna, where my home farm is. It is a rural and agricultural area. Luckily, there were no fatalities. Power was out for weeks. Help poured in, mostly volunteers. National guard showed up and helped to clear roads, Red Cross offered tarps, ice, batteries, Team Rubicon cleared trees from damaged homes and opened driveways. People from all over the island brought ice for coolers, fresh energy and sharp chainsaws, and organized hot food booths for free – that was really great, fills the belly and warms the heart. There was more help than can be properly acknowledged here, it would take a book. Thank you all.

The lava is flowing from Pu’u O’o, a cone on the flank of Kilauea, an active volcano. It has been flowing constantly from this source for more than thirty years. It was previously flowing from various vents on the southern side of the ridge, making it all the way to the ocean regularly. The resulting lava flow covered the town of Kalapana starting in 1986. The lava is now flowing on the other side of the ridge, the northern side, which is about to make a pie slice shape of land which me and about 10,000 other people live on. It is a unique community, a wild west of sorts. Many are fully or partially off-grid, it’s remote and rural with ample rainwater to catch and plenty of sunlight for solar panels. There is fishing, hunting, and farming. In a strange twist, there is a geothermal plant that supplies enough energy for all 10,000 and a lot more. As of the time of writing this, the lava is less than a mile from the historic little town of Pahoa, the only town for miles. It is moving at a few hundred feet per day on average.