Finding Biochar and Terra Preta in the Peruvian Andes

Finding Biochar and Terra Preta in the Peruvian Andes; A tale of adventure from Josiah Hunt.

I am a biochar practitioner, a biocharista; it is my career and has been since 2008. Recently I went to Peru. I went for personal reasons. I didn’t go specifically in search of biochar and Terra Preta like soils, yet much to my excitement, that is what I found.

On a mountaintop in Peru, surrounded by steep valleys cut by rivers that later become the Amazon River, are the ruins of the village of Kuelap. And this is where I found black Terra Preta soilsâ€”almost by accident. Kuelap was the citadel of the Chachapoyas, a fierce tribe who claim with great pride to be the only group not conquered by the Incas. They ruled the upper reaches of the Amazon, though you would never know it was the Amazon without travelling downstream as this area is desert in the valley areas and cloud forest in the tall peaks. Today, there is a village just below the mountaintop ruins, also called Kuelap.

I had been in the region for a few days, first in Leimebamba, a timeless village that serves as a hub for the region. It was accessible by road. There were many other villages that were only accessible by foot. They weren’t much different.While eating breakfast in Leimebamba, browsing my travel book for travel ideas, I noticed a courtyard garden and was invited in. The garden’s soil was black with fresh charcoal. My plans for the day changed. I began to tour the gardens of willing village residents, which was most everyone I met. Every garden I saw had charcoal in the soil; some with large amounts. When I inquired, the responses seemed to be somewhat curious, as if, “where else would it go?â€ It reminded me of the American understanding of why a sneeze rarely ever goes without a “bless youâ€, it’s just what we doâ€”it is our culture.

The footpath to get to Kuelap is a rugged trail five miles straight up a mountain. When I arrived at the village near the peak I was met with the smell of fresh baked bread. It was a family’s residence and they were baking for their community. I was invited in. The bread, made from grains grown in their farms, cooked in their wood oven, and shared with a smile, was the best I’ve ever had. The leftover charcoal went to the soil,and apparently not by accident.

After my stop in the village, I kept walking to the top of the peak to the ancient village ruins. When I finally arrived, I was granted a gift that perhaps only a soil geek would find interestingâ€”a freshly revealed soil profile at the base of the ruins. It was not an archaeological dig; but appeared to be merely a flat pad cut from a steep hill. The top soil layer was dark with charcoal. Upon further inspection I found pottery shards and shells at depth in the soil showing evidence of cultivation. These characteristics – dark with charcoal and containing pottery shards at depth – are what I have understood as key defining characteristics of the famous Terra Preta soils of the Amazon Basin. 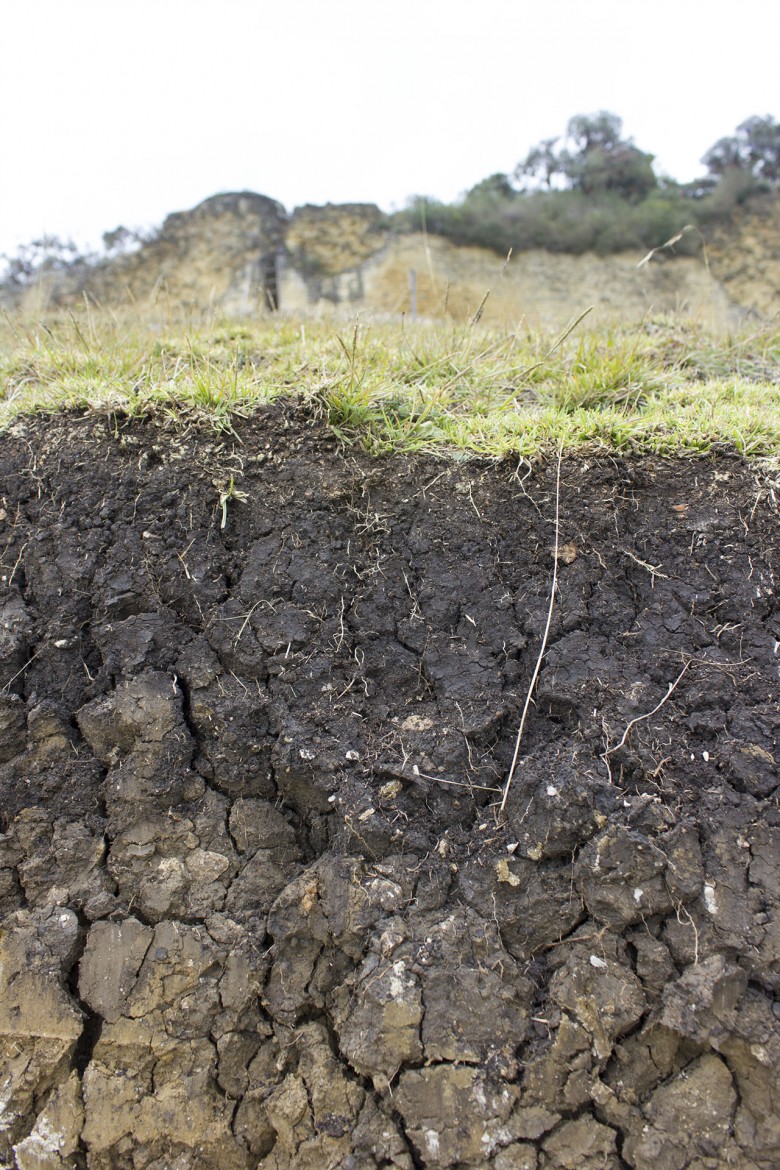 On the long trailup to the ruins, I had seen dark pockets of soil, but at first glance I found no potteryâ€”the evidence of humans. It turns out that I just didn’t look hard enough as the pottery was mixed in with other small stones. Though I was racing the sun to get down off the mountain before dark for my return, I stopped at several of the distinctly dark soils I had seen on my way up the trail, and found the unmistakable mark of altered soils; dark with charcoal and littered with broken pottery. This fit in well with the current habitation patternsâ€”a centralized village on the plateau above and farmhouses scattered on the hillsides.

In one particular place, across from a small hut, I found both fresh charcoal and ancient pottery side by side in the “Terra Pretaâ€ topsoil.

Why tell this story? One, to highlight to our biochar community that we’re among good company in our soil management practices. And two, I wanted to share the exuberant feeling of choosing to go on my own, rather than the guided tour, and the amazing discoveries that can happen on that path.

On this trip, I observed fire, food, farming, and culture intertwined in an intricate balance. That is a large part of the reason I chose Peru as a destination; it was a hotspot in humankind’s evolution into agricultural practices, a cultural hub comparable to any of the greatest civilizations. Peru still retains strong connections to that past and I wanted to see if I could hear a few echoes of that. I did, though I still find it difficult to express that understanding in words. Good thing I took lots of pictures which allow you, the viewer, to catch a glimpse of what happened and process the information for yourself.

After I got home, I made a short biochar film from the pictures I took: One Monday…Peru! The name is due to planning the trip on Friday, buying my ticket on Saturday, and flying on Monday. In this short story, I’ve highlighted the biochar-specific of aspects the adventure, but there was much, much more as is shown in the film and it is all relativeâ€”even my surfing wetsuit for the trip had a bamboo charcoal infused lining.

Leave a reply Click here to cancel the reply