A Definition of Biochar

A definition of biochar.

Biochar:  biomass charcoal when used or found in soil. 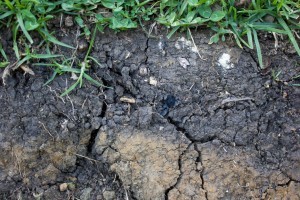 A dark soil horizon in rural Peru, with a visible piece of charcoal still intact.

How the term was born…

Biomass charcoal has been part of the soil building process for as long as fire and plant life have co-existed, about four hundred million years.  It makes up a significant portion of the organic matter found in soils throughout the world.  Humans have been intentionally using charcoal in soil for at least a few thousand years.  But the term biochar didn’t exist in the way it does now until about 10 years ago.  It is not that there has been a new discovery, or that the material is now different, it is the context that changed.

A few key characteristics of biochar: 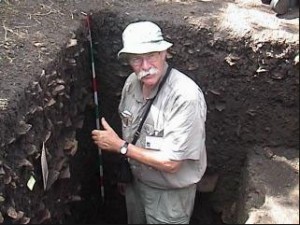 Wim Sombroek at an archeological dig, a Terra Preta site in Brazil.

A young Dutch boy survived famine with thanks to a small plot of dark fertile soil gifted to him by the care of his ancestors, he went on to become a soil scientist.  As a grown man, Wim Sombroek found himself in the Amazon, studying peculiarly dark and fertile pockets of soils left behind by the cultures of centuries ago.  He helped to pinpoint charcoal as one of the key ingredients which allowed the soil to retain it’s fertility for hundreds of years after it’s creation, starkly different than the lighter colored surrounding parent soil.  He dreamed that in our modern world we could employ charcoal as a means of improving long-term soil fertility, and it could be done so in a way that helps to solve a distinctly modern problem: climate change.

Thus the term biochar was born.  It is simply biomass charcoal when used or found in soil, but the new term was born from a dream of simultaneously achieving long-term soil improvement and carbon sequestration for climate change mitigation.

1.) But wait… how can the creation of charcoal and it’s use in soil affect climate change?  In a nutshell: 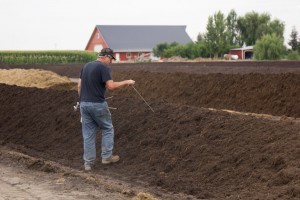 Biochar is used on this farm to improve the composting process, notably resulting in reduced loss of nitrogen and faster maturing.

2.) In practice, biochar often takes a cascading pathway towards soil. A common example is the use of biochar with food waste and manures to reduce odors and nutrient loss, with the resulting material eventually being used as a fertilizer.  The term biochar is applied as it begins down such a pathway, or it’s intent is determined.

3.) Ash happens.  When thinking of biochar, generally it is the blackened plant matter pictured in mind.  But some amount of ash is always present in fresh biochar.  Ash is the mineral portion, generally a white/grey color.  Ash represents minerals that were drawn from the soil into the plants body, and has very interesting fertility enhancing characteristics of it’s own.  The ash portion of biochar generally determines its pH and liming potential.

Thanks for taking part,

Pyrogenic organic matter in soil: Its origin and occurrence, its chemistry and survival in soil environments, Knicker, Heike , Quaternary International, (2011)