How to Make Biochar from Coconut Husks and Fronds, for Better Toilets and Bigger Bananas

We caught a ride on a sail powered cargo ship, learned how to gut a fish without a knife, and taught a small village how to make biochar with only a shovel and match.  My son and I were on adventure, fishing and surfing our way through a bonding experience in a remote island chain that faces impending evacuation as the rising oceans continue to consume the small islands of coral they live on.  It turns out biochar is a very useful tool there and our new found friends were eager to learn more, so here is a brief story of what they found most useful and how we went about making it happen. 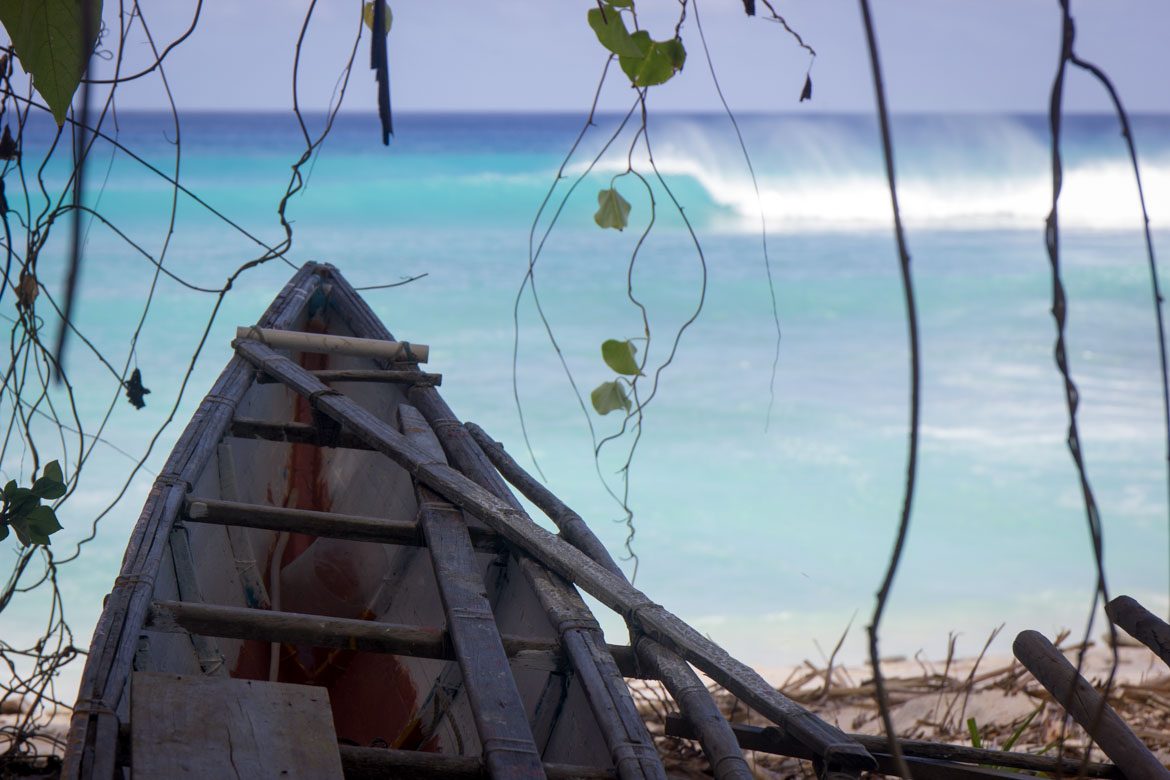 When the island is only ten feet tall, and porous as sand, you probably shouldn’t be pooping down into the aquifer, and they mostly don’t, but we did (at first).  They installed a flushing toilet at our lodge for visitors to use.  The locals would normally just go in the bush or take a short swim.  So it brought up the conversation of composting toilets, and that led to biochar (to use in the toilets), that led to building soil (and bigger bananas), and even a little bit on the touchy subject of climate change and rising seas. 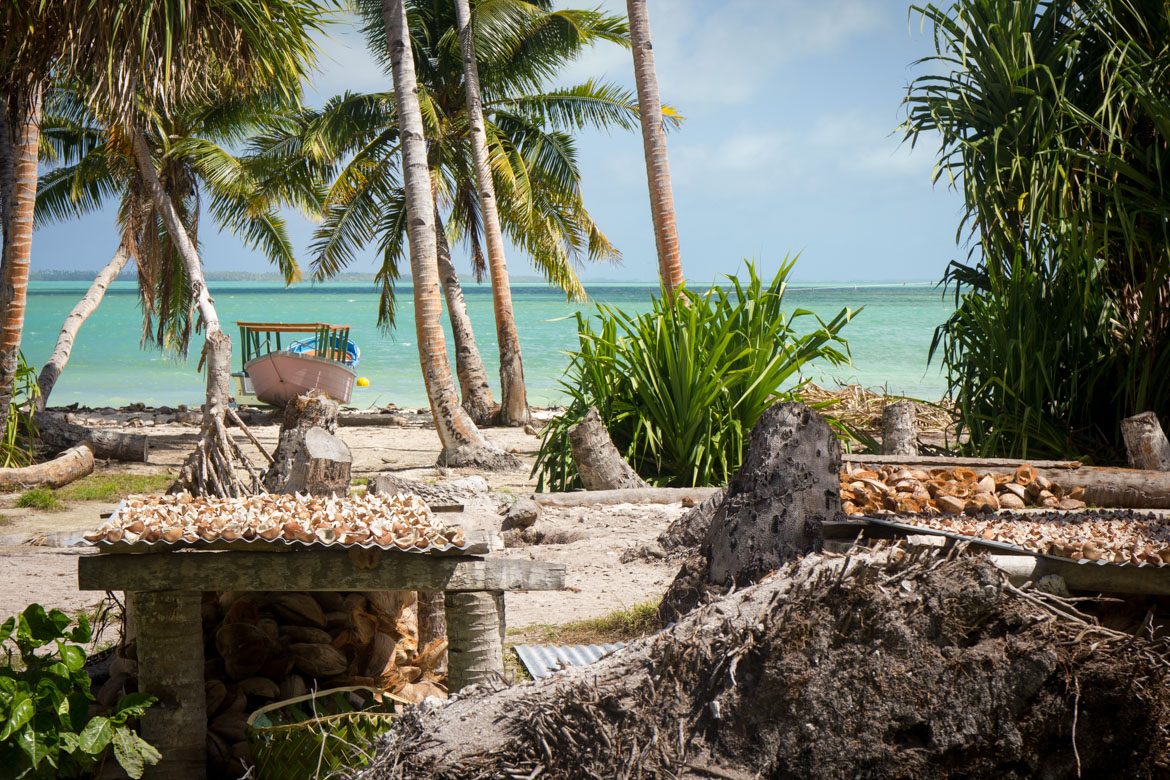 The Resources: Coconut husks and fronds were in excess.

1.) Copra, the dried meat of mature coconuts, is the main export.  Coconuts are collected, cut in half, sun-dried, the meat is scooped out, and the husks pile up.  Coconut husks and sub-par copra served as the common cooking fuels, but there was still quite a bit of excess coconut husks.
2.) As a dominant canopy tree, coconut fronds littered the floor.  It is important to maintain a mulch layer in the forest floor, and green fronds are harvested for use in thatched roofing, but in the village there was an excess of fronds, and particularly the hard woody base of the frond which is not as useful in building as the tips and leaves. 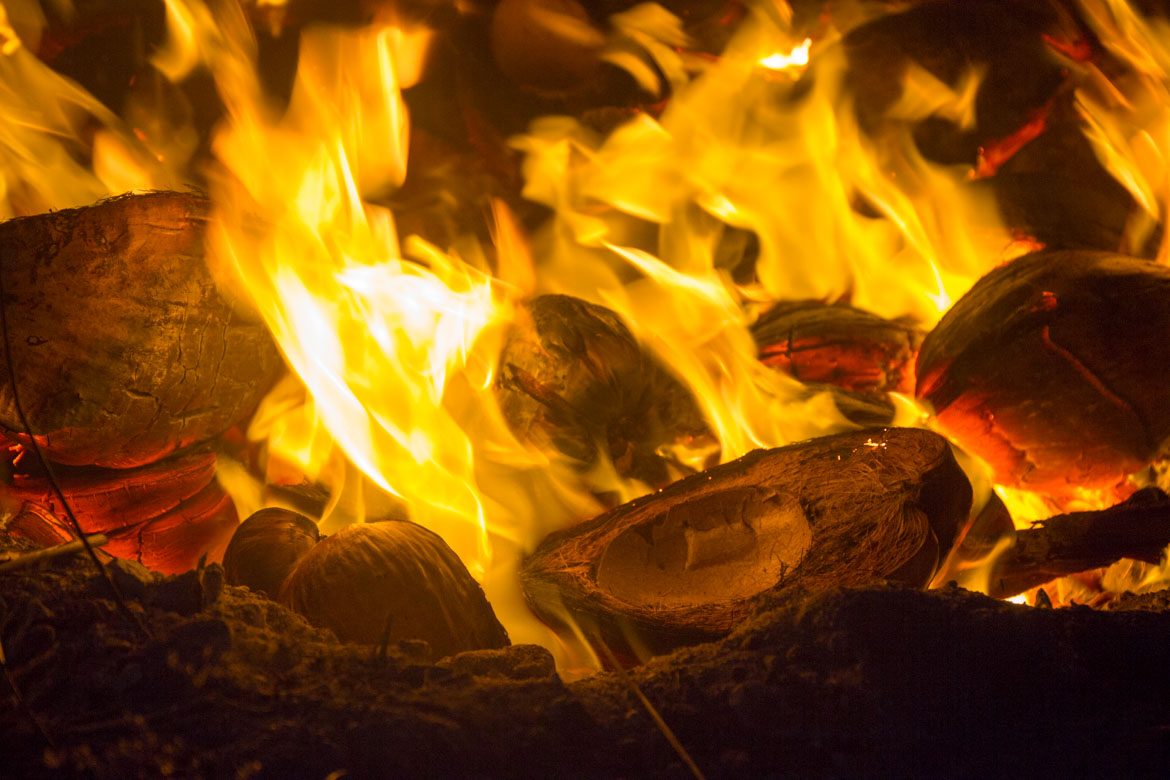 How to make biochar without machines or metal:

Wood burns in two phases, first from wood to charcoal, then from charcoal to ash.  The second phase can only happen with oxygen, if you control the oxygen, you control the charcoal production.  To do this we dig a pit in the ground, 1.5 to 2 meters across, and 1 to 1.5 meters deep, cone or bowl shaped.  Start a fire at the bottom of the empty pit.  Coconut frond burlap and pandanus leaf make good fire starter.  Stoke the fire with coconut frond tips and leaves.  When the fire’s momentum has built, begin feeding coconut husks.  Feed coconut husks as fast as can be done while still maintaining a clean burn, and without choking the fire into a smoky mess.  Place husks in a donut shape in the pit, leaving the center open to act as a chimney.  Use fresh material to block the rivers of air that will want to form like waterfalls along the edges of the pit towards the embers in the bottom.  Spank the fire periodically with a shovel or stick to settle the char and disrupt any rivers of air that may have formed.  In this way, the charcoal that is created in the bottom of the pit will continuously be protected by a new layers of coconut, which then becomes charcoal, and which is then covered with more coconut, which then becomes charcoal, and is covered by more, and so on. 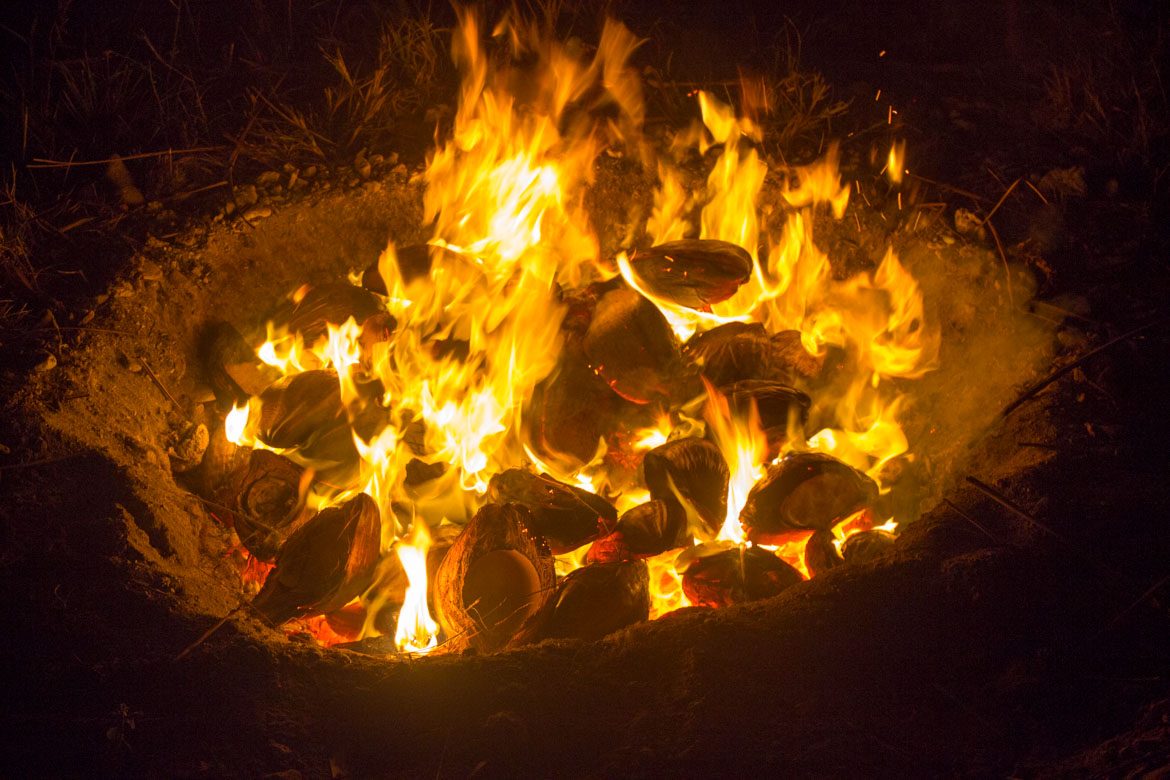 After some time, and depending on your resources, switch from coconut husks to coconut fronds bottoms.  The frond bottoms stack differently than the husks, so the chimney that was maintained in the middle can be slightly abandoned now, but you will still want to leave the center more loosely packed than the edges.  Feed the fronds as fast as possible while still maintaining a clean burning, relatively smokeless fire.  Don’t forget to spank the fire again. 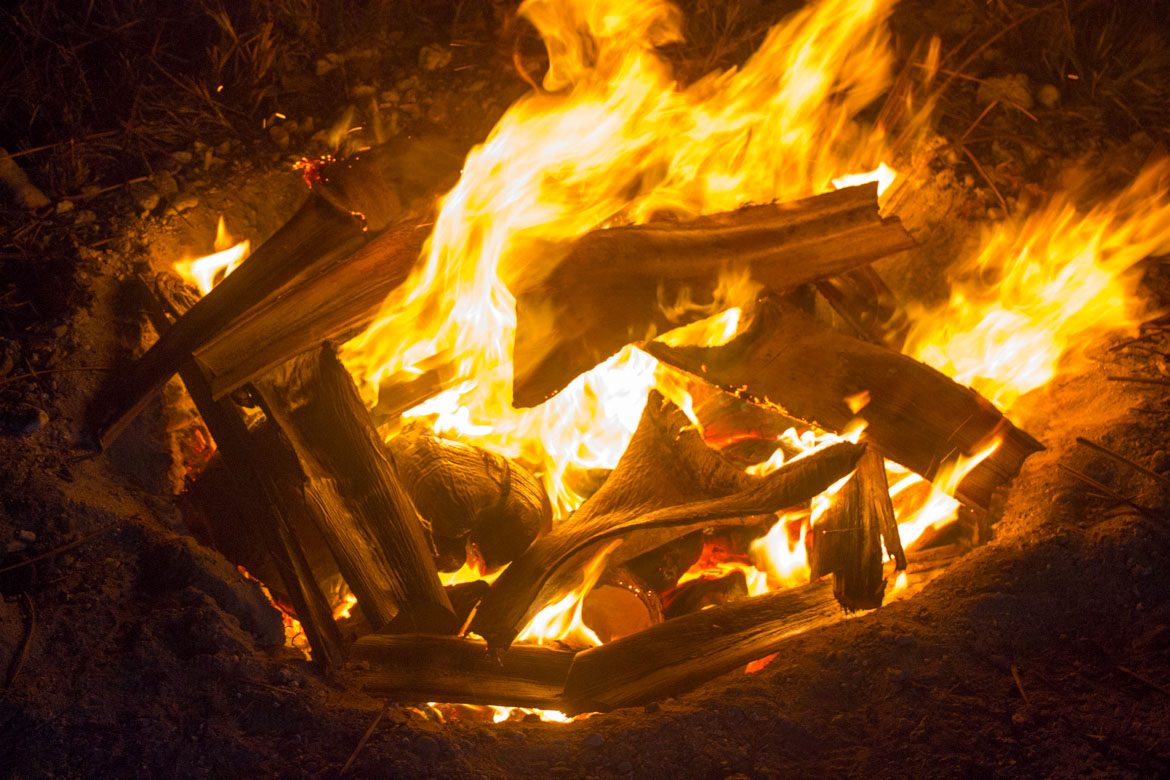 When it appears that the embers are near filling the pit, you will want to switch to thinner materials such as frond tips and leaves.  These will burn to charcoal relatively quickly, and make for a nice cap to the fire.
Wait until the orange and yellow flames have stopped dancing, and the fire has rested into a glowing bowl of embers, then shape it flat with a shovel, remove any unburnt stuffs at the surface, cover the embers with 4 to 6 inches of soil, and stomp it down tight.  The fire may or may not die on it’s own after this, it depends on how much the soil breathes. You will want to wait one day, up to three days before harvesting the charcoal. 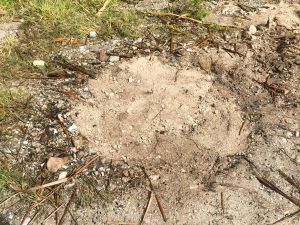 To harvest the charcoal, first poke a hole straight down the center to the bottom to see if it is still alive.  Pour some water down the hole, and check for steam.  If the fire is still alive, you will save a lot of water by putting water to the bottom first, through a pipe or a carefully made hole.  The steam made at the bottom will help cool off the whole pile as it rises through the charcoal.  Dirty water can be used, but preferably not salty.  Then remove all the dirt from the cap.  Once dirt is removed, harvest slowly being sure to add water to every little bit of charcoal.  It does not have to be drenched in water, moist will do, but if one ember remains alive in the pile, it can re-ignite.  The charcoal will not be damaged by rain or sun, it can be left in the open, but it may be wise to cover with coconut fronds so that it does not get blown by the wind, or made into a mess by chickens and pigs.

Best uses for biochar on a small Pacific Atoll:

Depends on the island.
1.) In this village, they seemed most interested in the use of the biochar for composting toilets.  If they could have a composting toilet at their homes it would be more convenient, cleaner, and produce a source of homemade soil builder that could be used to help grow bananas and papayas.  Fuel drums were fairly easy to find.  So the model of greatest interest was to turn a fuel drum on it’s side, cut a hole (there was a few welders), put a seat over the hole, then add two scoops of a charcoal and soil blend after every use.  When the barrel gets near full, roll it out, replace with a second barrel, and leave the first barrel to age till the second is full (several months), then empty in the banana patch, cover with mulch, and repeat.
2.) Pigs and chickens go to the bathroom too.  Many questions were asked about how to use biochar to help with that.  The answers I gave were basically to use the biochar mixed with a bit of dirt as a litter to soak up the excrement and odors, then towards a compost pile, then eventually to the soil. 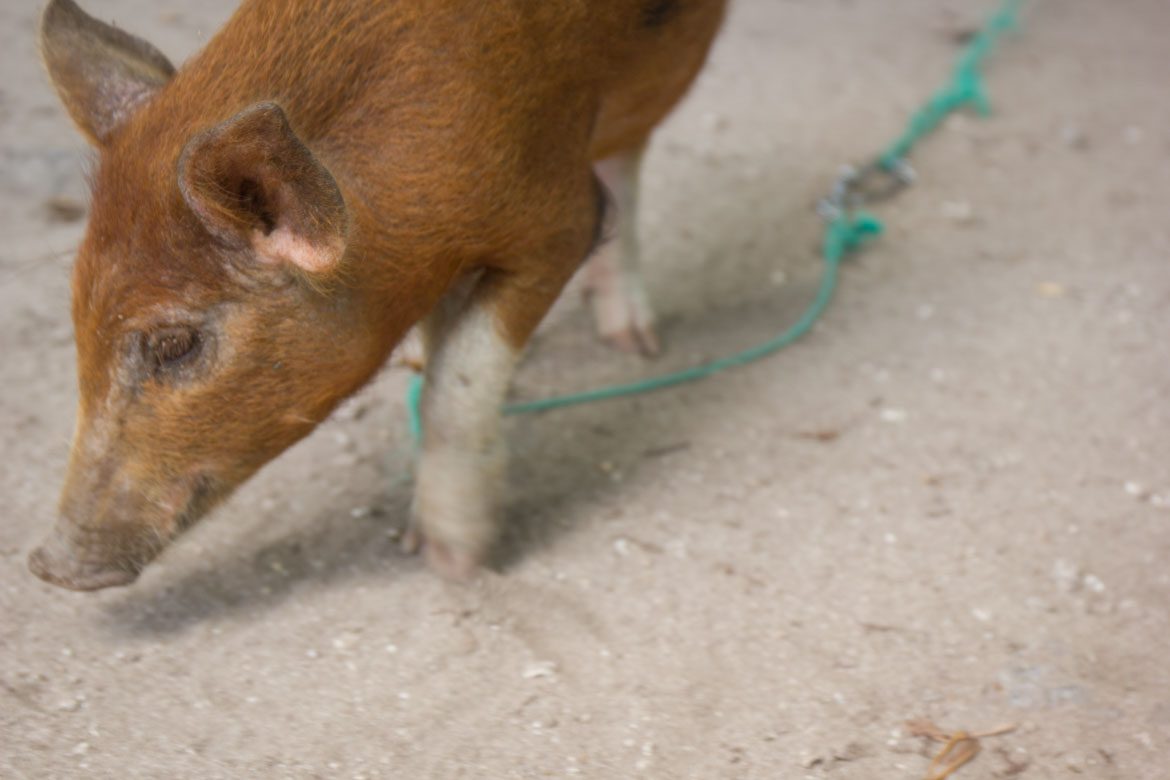 3.) Better compost can be made by adding a little biochar.  About 10% by volume usually works great.
4.) Water filters can be made with clean charcoal.  After the residual ash is flushed, the charcoal can be useful in filtering water.  The water table was low and full of roots, decaying roots made for some stinky and even colorful well-water occasionally, which could be primarily filtered though a barrel full of charcoal.  While the charcoal will not remove all pathogens, it can definitely help remove odors and impurities, so that after boiling or UV treating the charcoal filtered water, the result is, clear, clean and tasty water.
5.) Building soil up on a island being buried below a rising sea.  Like a bicycle outrunning a freight train, the bicycle will not win this race.  But the idea that by transforming their coconut residues into stable charcoal and adding this to their soil, that they were adding something of permanence to build up their cherished bit of land – it was not lost on them.

I plan to return within the year.  If you have any expertise in composting toilets, please share with me.  If you know of other places that may benefit from learning how to make biochar in this way, please feel free to share this article, and consider reaching out.
It felt great to make fires with a group of people that were so genuinely interested and stood to benefit intimately in their daily lives.  They had few material things compared to me, but they did not want a handout, they wanted to share smiles, they wanted their home to be better, and it was an honor for my son and I to take a small part in that.  As is often the case when I have travelled, I felt that they had so much more to teach me than I could offer them.  I arrived home re-inspired about working with biochar and what I can offer to the world.  My son and I returned smiling, a bit wiser about what a village is and how nice it can feel. 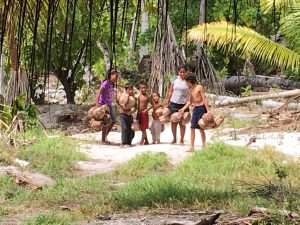