Pacific Biochar has partnered with Manteca Unified School District (MUSD) to help bring a unique biochar field trial to life.  One half of a five acre portion of the farm has been amended with biochar.  Data collection will be highly focused on water use efficiency.  Also measured will be nutrient efficiency, soil microbial dynamics, and yield.  The resulting produce will be used in MUSD’s Nutrition Education program. 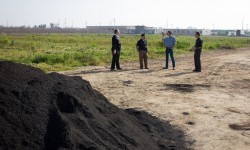 The biochar field trial covers a total of 5 acres and was divided into four treatments; biochar, biochar and compost, compost, and no amendments.  As recommended by Pacific Biochar the compost and biochar combination were pre-blended and allowed to settle for one week before application.  The application rate is relatively low, only 1/8″ cultivated about 5″ deep, resulting in about 2.5% by volume.  The biochar used was BlackLite, and with it’s low density, the application rate is equivalent to about 1.5 tons per acre.  Much of the early literature in biochar notes application rates 10 times that much.  It is believed that finding successes in these lower ranges of application rate will be critical in helping farmers find near term economic gains with biochar.  Additional applications to the same plots will be pursued as the experiment matures, incrementally developing the soils into higher soil carbon levels.

MUSD farm manager Cole Dutter has installed moisture sensors that will be taking readings multiple times each day from multiple points in each plot.  Soil samples were taken before application, will be taken during plant growth, and after harvest.  Produce harvested will be graded and weighed, tissue samples taken for nutrient analysis.  Soil samples will be taken directly after initial harvest. 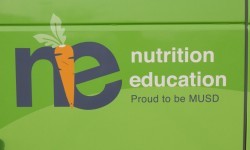 Under the guidance of farm manager Cole Dutter, an assortment of table veggies will be planted by and for the students of the Manteca district.  Manteca Unified School District operates a 40 acre school farm.  One of the school programs that takes advantage of the farm is Veggie Express.  Veggie Express is a Farm to School program that grows food for the cafeterias at MUSD.  The program is funded by the produce that it provides the Nutrition Education department of MUSD. The goal of Veggie Express is to provide vocational training to high school students who are interested in agriculture and to expose those students to new and emerging technology and management strategies.

There’s black gold sitting in a pile at the Manteca Unified School District farm. It’s the stuff that California farmers dream of â€” an organic substance that can yield water savings between 10 to 20 percent, reduce the need for fertilizer, provide bigger yields, reverse the depletion of soil, and can even reduce ammonia smells and manure leeching issues at dairies. For the next two years the black gold known as biochar will be part of the first extensive field test of its kind in the world’s most productive farming region â€” the San Joaquin Valley. Pacific Biochar is partnering with the Manteca Unified School District as well as working with the City of Manteca to see how well greenhouse lab results involving biochar mixed with soil translate when applied in fields. If successful, the Manteca Unified field tests could entice farmers to employ biochar to improve their bottom line while reducing the use of California’s most precious and critical resource â€” water. “Biochar has been proven to reduce water use and retain more nutrients,â€ noted Josiah Hunt of Pacific Biochar. Biochar is as old as plant life and fire itself. It is a fine-grained charcoal made from biomass â€” biological material such as agricultural waste. It is an organic carbon free of fossil fuel products, geological carbon, and plastics. As soon as next week, Manteca Unified students under the direction of school farm instructor Cole Dutter will plant four one-acre plots for the two-year field test. The control plot will have native soil. The other three will use biochar [*error, the plot design is correctly described in the Pacific Biochar text above] â€” one with biochar only, one with biochar inoculated with microorganisms, and one with biochar mixed with the soil as well as being inoculated and mixed 4 to 1 with compost. â€¢ â€¢ â€¢

Students will raise crops for school lunch program The students will plant different crops throughout the year including cabbage, peas, cauliflower, broccoli spinach, and carrots among others. Food harvested will be used in the school lunch programs. The dozen students will work five days a week and be paid minimum wage. The fields will be fallow only one month â€” June. They will meticulously collect and record a variety of data ranging from moisture readings to the weight of plants produced. There is a growing collection of research in greenhouses and labs that show biochar can deliver the results that Hunt describes. It has been used successfully in an area of Australia where researchers have reduced water use and increased yields in soil similar to the Veritas sandy loam at the school farm. He recently returned from Vietnam where he assisted on a project that tied biochar production into a farming operation to generate energy to process crops as well as to help increase yields and conserve water. “This is important,â€ Hunt said of the field test. “It will show what it (biochar) can do in the San Joaquin Valley, the world’s greatest farming region.â€ Biochar could prove a game changer especially as California enters its fourth year of a severe drought. Much of the San Joaquin Valley is experiencing extreme overdrafting of aquifers while a shortage of water â€” both surface and underground â€” has forced farmers to keep fields fallow and to rip out orchards as they no longer have adequate water to keep trees alive let alone produce crops. Hunt showed the absorption quality of the biochar by grabbing a fist full and slowly pouring a coffee cup of water into the opening of his hand. After 40 seconds, the first drops of water starting seeping out from the bottom of his fist. Other tests have shown when biochar is mixed with soil in dairy cattle pens it reduces the leeching of ammonia that poses a danger to water sources as well as reducing smell. That manure with biochar was then tilled into a pasture enhancing grass growth and again reducing leeching issues. They are planning quarterly open houses at the school farm to show farmers and the community first-hand their results. â€¢ â€¢ â€¢

Manteca’s interest is in protecting, expanding agricultural employment Economic Development Manager Don Smail noted the city’s interest is in protecting agricultural jobs, generating new jobs with the goal to ultimately secure a biochar conversion facility for Manteca, to reduce water use, improve air quality, to possibly reduce pollution issues connected with fertilizer, and to yield more food production per acre. The city’s economic development strategy was refined several years ago to targeting employment opportunities in agricultural related ventures given Manteca’s strategic location in the world’s richest farming region and ready access to rail, freeway, airport and sea port to move farming goods. Agriculture is the No.1 employer in San Joaquin County. Five of the top 10 counties in the United States for agricultural production are within two hours of Manteca while two of the remaining five counties are within 3.5 hours. (The top seven counties for farm production based on the 2012 United States Department of Agricultural report are from California. They are in descending order: Fresno, Tulare, Kern, Monterey, Merced, San Joaquin, and Stanislaus.)

For questions or comments, please do not hesitate to contact Pacific Biochar with the Contact Us page