Biochar can be simply defined as a biomass charcoal when used or found in soil. For as long as fire and plant life have coexisted, pyrogenic organic matter (biochar) has played a role in the development and fertility of topsoil. In laboratory and field studies, biochar consistently demonstrates a significant beneficial effect on plant growth and development resulting in increased crop yield and plant productivity. Biochar is effective in retaining water and nutrients in the root zone and available to plants, increasing soil tilth, enhancing root development, and supporting microbial communities. Biochar is highly recalcitrant, it does not easily decay, and thus has the ability to sequester organic carbon for millennia—a benefit to soil fertility and a benefit to humanity in helping to reduce atmospheric carbon.

Plant nutrients are lost to groundwater through leaching and lost to the air through volatilization. This poses a loss of efficiency on the farm and an environmental problem downstream. The United States Environmental Protection Agency (US EPA) has stated: “Nutrient pollution is one of America’s most widespread, costly and challenging environmental problems, and is caused by excess nitrogen and phosphorus in the air and water.”

Fertilizer use efficiency has been notably improved after the application of biochar. This has been primarily observed as a reduction in the loss of plant nutrients. Analogous to the use of charcoal in filtration, biochar (a type of charcoal) can help hold onto plant nutrients in the topsoil. However, it is important to note that the majority of nutrients held by the biochar are still plant available—resistant to loss, yet still available for use.

Nitrogen is an important agricultural nutrient often lost during composting and in soils. These losses can result in undesirable greenhouse gas emissions and groundwater contamination. Biochar reduces ammonia and nitrate losses from composting and nitrate leaching in soils, resulting in greater nitrogen retained in compost and soils where biochar is applied.

The anatomical structure of the plant material used to make biochar—the vascular tissue of tubes and tunnels that were used to carry food and water throughout the plant body—remains largely intact during and after the production process of firing. The resulting biochar material is intricately structured, porous, resistant to decay, and carbon based, characteristics well suited to supporting microbial life. When biochar is used in soil, microbial communities are observed to be more diverse, active, and are found to fare better through adversity.

Fungal to bacterial (F/B) ratios as well as total soil microbial biomass, often cited as indicators of soil health, are shown to increase where biochar is applied. The micro-habitat created by biochar particles encourages the proliferation of these soil organisms by providing surfaces and pores of varying sizes for organisms to occupy, pockets of water and entrapped air, as well as electrical conductivity over short distances. Carbon structures in biochar act as electron donors, acceptors, and electron shuttles making the complex electrochemical reactions necessary for microbes to perform nutrient cycling and vital metabolic functions more efficient.

Organic matter is critical for soil function and soil quality. Charcoal (biochar) is a stable form of soil organic matter. It is naturally occurring and has been found to make up as much as 30% of the organic matter in soils such as the dark fertile soils of Iowa, and of the famously fertile man made soils in the Amazon region which are referred to as Terra Preta.

Using biochar provides a method of increasing soil organic matter in a way that is stable for centuries. The exact long-term stability of a given biochar can be estimated with a fairly simple analytical test that measures the hydrogen to organic carbon ratio (H:Corg). This method has been acknowledged by the IPCC and a series of voluntary carbon markets as an acceptable means for measuring long-term durability of biochar materials. The biochar that is manufactured and distributed by Pacific Biochar has an average H:Corg ratio of 0.20, which implies relatively high stability. For a biochar such as ours, it is estimated that greater than 80% of the original carbon will remain intact after 100 years in soil. This has important implications for long-term soil fertility and also for safely sequestering carbon.

Over the past decade research into the agronomic and environmental benefits of biochar has advanced considerably leading to widespread adoption by national and international agencies. The USDA NRCS Environmental Quality Incentives Program (EQIP) introduced the Soil Carbon Amendment Conservation Practice Standard Code 808 in 2019 providing funding to farmers and land managers for biochar and compost applications. The IPCC Special Report on Climate and Land released in 2019 highlights biochar as an effective carbon sink in soils that reduces GHG emissions while improving drought resilience and soil fertility.  A recently published review article quantified biochar’s agronomic benefits using 26 global meta-analyses, representing more than 1500 scientific articles published between 2016 and 2020. The results, displayed in Figure 1 (below), highlight how biochar can directly impact farm productivity and profitability. 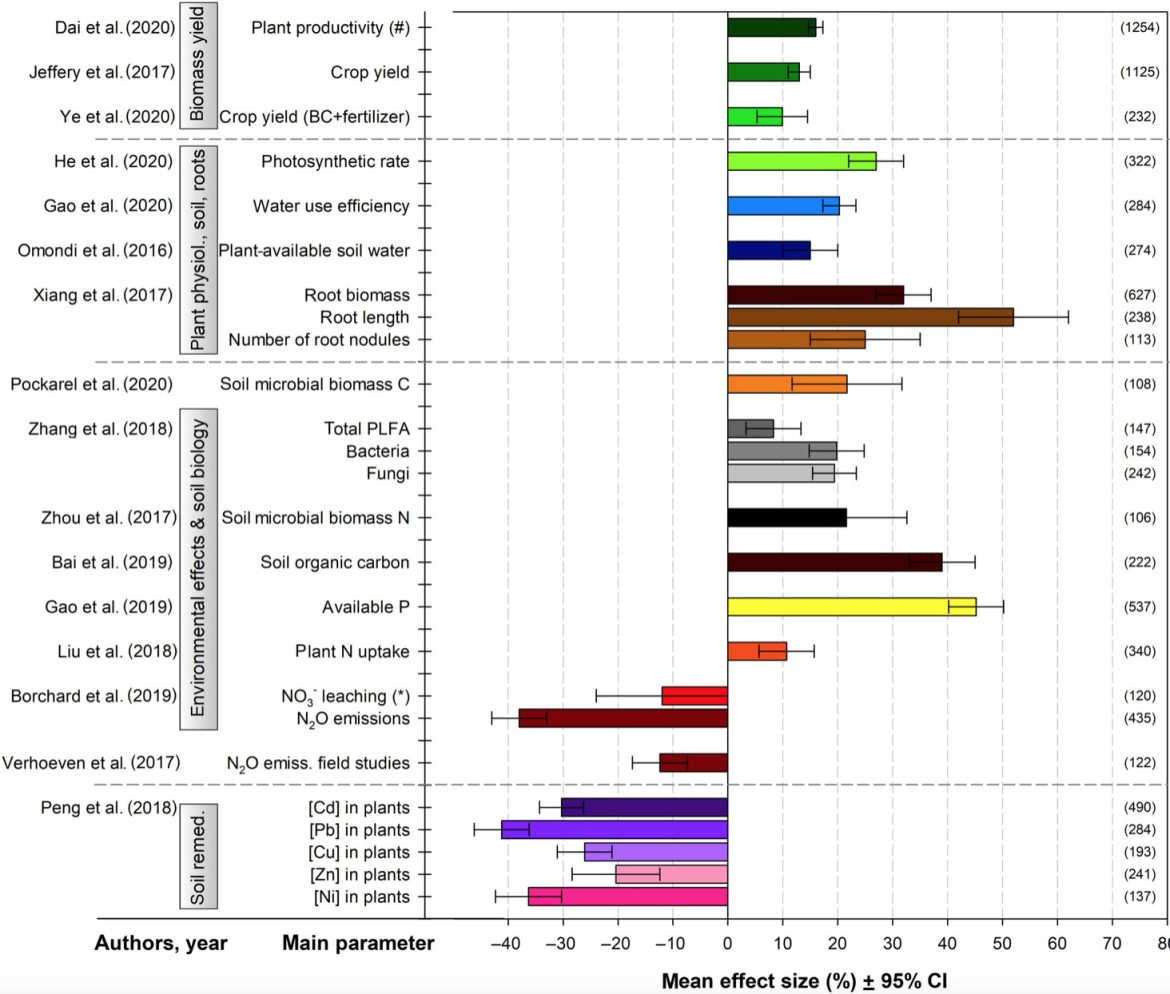 Figure 1: Courtesy of Schmidt et. al – “Selected parameters with highest agronomic relevance that were investigated in the 26 reviewed meta-analyses. The mean overall effect size (% change) and 95% confidence intervals are given as reported in the original studies. The numbers in parentheses indicate the number of pairwise comparisons used for that specific parameter” [20]

In summary, where biochar is applied: