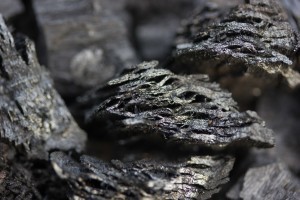 Biochar is simply defined as a biomass charcoal when used or found in soil. For as long as fire and plant life have co-existed, pyrogenic organic matter (biochar) has played a role in the development and fertility of topsoil. Biochar is effective in retaining water and nutrients in the root zone where it is available to plants, increasing soil tilth, and supporting microbial communities. Biochar is highly recalcitrant, it does not easily decay, and thus has the ability to sequester organic carbon for millenniaâ€”a benefit to soil fertility and a benefit to humanity in helping to reduce atmospheric carbon.

Plant nutrients are lost to groundwater through leaching and lost to the air through volatilization. This poses a loss of efficiency on the farm and an environmental problem beyond the fence. The United States Environmental Protection Agency (US EPA) has been quoted as saying: “Nutrient pollution is one of America’s most widespread, costly and challenging environmental problems, and is caused by excess nitrogen and phosphorus in the air and water.â€

Fertilizer efficiency has been notably improved after the application of biochar. This has been primarily observed as a reduction in the loss of plant nutrients. Analogous to the use of charcoal in filtration, biochar (a type of charcoal) can help hold onto plant nutrients in the topsoil. However, it is important to note that the majority of nutrients held by the biochar are still plant availableâ€”resistant to loss, yet still available for use.2

The anatomical structure of the plant material used to make biocharâ€”the vascular tissue of tubes and tunnels that were used to carry food and water throughout the plant bodyâ€”remains largely intact during and after the production process of firing. The resulting biochar material is intricately structured, porous, resistant to decay, and carbon based, characteristics well suited to supporting microbial life. When biochar is used in soil, microbial communities are observed to be more diverse, active, and are found to fare better through adversity.3

Organic matter is critical for soil function and soil quality. Charcoal (biochar) is a stable form of soil organic matter. It is naturally occurring and has been found to make up as much as 30% of the organic matter in soils such as the dark fertile soils of Iowa, and of the famously fertile manmade soils in the Amazon region called Terra Preta.

Using biochar provides a method of increasing soil organic matter in a way that is stable for centuries. The exact long-term stability of a given biochar can be estimated with a fairly simple analytical test that measures the hydrogen to organic carbon ratio (H:Corg). This method has been acknowledged by the California Air Pollution Control Officers Association (CAPCOA) as acceptable for measuring greenhouse gas emissions reductions. The biochar that is manufactured and distributed by Pacific Biochar has H:Corg ratio of 0.32, which implies relatively high stability. For a biochar such as ours, with an H:Corg below 0.4, it is estimated that greater than 90% of the original carbon will remain intact after 100 years (to be conservative, a lower rate of 70% is used for carbon accounting). This has important implications for long- term soil fertility and also for safely sequestering carbon.4